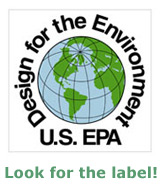 Flame retardants have been in the news again recently, as four health systems announced they would follow Kaiser Permanante’s lead by halting future purchases of furniture treated with flame retardants. As participants in the Healthier Hospitals Initiative (HHI), these health systems will specify with suppliers that upholstered furniture should not contain flame retardants where code permits. Commonly used flame retardants, particularly halogenated ones, have been found to be persistent and bioaccumulative in the environment, and have been linked to a variety of health problems, including endocrine disruption, cancer, neurotoxicity, and adverse developmental issues among others. These compounds serve as great illustration of the need for source reduction and safer alternatives considerations during P2 Week.

One such class of compounds, polybrominated diphenyl ethers or PBDEs, were commonly used in electronics, among other things. Back in 2004, a study conducted by the Electronics Take Back Coalition (then called the Computer Take-Back Campaign) and Clean Production Action found PBDEs in dust swiped from computers in university labs, legislative offices, and a children’s museum; many similar studies would further illustrate the ubiquity of these compounds in our everyday environments. That same year, penta- and octaBDEs were phased out of manufacture and import in the US. By 2009, the US producers of decaPBDE had reached an agreement with EPA to phase it out from manufacture, import and sale by 2013. DecaPBDE has been used in television casings, cell phones, and other electronics. EPA’s Design for Environment (DfE) program has conducted a Flame Retardant Alternatives for DecaBDE Partnership, which released a final report in January of this year. Three other DfE partnership programs have focused on flame retardants, underscoring the recognition by the government and industry that many of these substances require replacement with safer compounds (see the DfE partnerships related to flame retardant alternatives for HBCD, those used in circuit boards, and those used in furniture).

Despite efforts to phase out and replace specific flame retardants linked to negative impacts, these compounds continue to be a problem in general. For example, some of the phased out PBDEs may still be in your home or office, if you have older electronic devices, or furniture containing treated foam. People don’t replace items like couches all that often, and those of us attuned to sustainability try to extend the useful life of the products we own as long as possible. This situation is an example of how you really can’t define any action as being entirely “green”–it’s good to keep items longer, but the tradeoff could be continued exposure to toxins. PBDEs and other flame retardants can also present occupational exposure risks in electronics recycling facilities where the compounds can become airborne during dismantling processes. Such facilities will continue to deal with older products that contain phased out compounds into the future; you’ve probably heard about the volumes of old CRT TVs and monitors electronics recyclers deal with, and the issues surrounding the lead within them. Consider that all those old monitors probably have cases with phased-out toxic flame retardants in them as well. And if established procedures are not always successful in preventing lead exposures in recycling operations, as has recently been illustrated, then it’s also possible existing controls may not be effectively protecting workers from flame retardants. I won’t even get into the whole issue of informal recycling of electronics, and the releases of flame retardants into the environment that surely results from such operations.

To make matters worse, some of the early-adopted alternatives have already been shown to be problematic themselves. Organophosphates, for example, have been used for decades as flame retardants in consumer goods, and their use increased as a replacement for the brominated flame retardants which were being phased out. But recent studies have detected higher than expected levels of organophosphates in outdoor air, including sites around the Great Lakes, suggesting that this class of compounds, which also is associated with its own list of human health concerns, could be as persistent, toxic, and as easily transported as the compounds it replaced. One particular organophosphate, known as “tris” or “chlorinated tris” was turned to as alternative to PBDEs, and has received a lot of recent attention as a study conducted by the Environmental Working Group and Duke University scientists was released showing blood levels of tris in toddlers that were on average five times higher than that in their mothers. Since toddlers are more sensitive than adults to chemicals that can effect hormones and metabolism, this finding is particularly disturbing. It’s likely that this result is due to the fact that these compounds so readily leach out of products, like furniture, and get into dust, just as PBDEs were shown to. Since toddlers tend to play on the floor and pop objects into their mouths, they’re at increased risk of exposure to toxin-laden dust than adults. It’s interesting to note that tris was eliminated from use in children’s pajamas in 1977 when it was found to be mutagenic, but it has continued to be used in other products, particularly in the types of foams found within furniture.

The multitude of issues related to these compounds have lead others, besides the health care systems mentioned earlier, to advocate for limiting exposure to flame retardants period, and re-examining their widespread use. The Green Science Policy Institute, for example, argues that flame retardants are used, particularly in electronics, in instances beyond those in which evidence supports the need for external resistance to candle flame ignition. (See The Case against Candle Resistant TVs published earlier this year, and The Case against Candle Resistant Electronics from 2008). Among other issues, they point out that widespread flame retardant chemical use may pose a clear occupational exposure threat to firefighters, since once a fire does start, the by-products released from the burning of materials containing them may cause greater risk to firefighter health than smoke not containing such by-products. They are not the only entity to suggest this (see this article in the Huffington Post, for example).

Incidentally, polychlorinated biphenyls (PCBs) were once used as flame retardants, among other things; their production was banned in the US in 1979 due to their toxicity and persistence in the environment. Despite this, we are still dealing with exposure to PCBs and how to properly dispose of materials containing PCBs. Just yesterday (9/17), a workshop addressing PCBs and Their Impact on Illinois was held at the University of Illinois at Chicago and simultaneously broadcast at the Illinois Sustainable Technology Center (ISTC), host agency for both GLRPPR and the Sustainable Electronics Initiative. Part of the impetus for the workshop was a recent political controversy over whether to allow a landfill situated over a large aquifer to be permitted to accept materials containing PCBs. Options for safe disposal of PCB contaminated materials remain limited and expensive. Like PBDEs, PCBs fell into the category of halogenated flame retardants; in their case the halogen involved was chlorine rather than bromine.

And like PCBs, other types of flame retardants are likely to persist not only in the environment, but on our list of headaches to deal with in terms of policy and disposal/clean up, well beyond the time at which any specific one of them may be banned or phased out. They represent a current, easy-to-relate-to example of why pollution prevention techniques, such as the employment of green chemistry, green engineering, and design for environment during the product design and development phase are so essential to human and environmental well being.