Today is an important “holiday” of sorts for those of us who are sustainability professionals. On this day in 1972, the United Nations Conference on the Human Environment, held in Stockholm Sweden, began (June 5-16, 1972). The purpose of that conference was to discuss human interactions with the environment, as well as encouraging governments and international organizations to take action related to environmental issues and providing guidelines for such action. This was the UN’s first major conference on international environmental issues, and it culminated in what’s commonly called the “Stockholm Declaration”—the first document in international environmental law to recognize the right to a healthy environment. Two years later, in 1974, the first World Environment Day was held on June 5 with the theme of “Only One Earth.” Since then, World Environment Day has been celebrated annually on June 5th. Each year has a theme around which activities center, and beginning in the late 1980s, the main celebrations began to rotate to different cities around the globe. Learn more about the UN Conference on the Human Environment at https://sustainabledevelopment.un.org/milestones/humanenvironment and the history of World Environment Day at http://worldenvironmentday.global/en/about/world-environment-day-driving-five-decades-environmental-action.

This year’s World Environment Day theme, chosen by the host nation, India, (New Delhi is the host city) is “beating plastic pollution,” with the tagline “If you can’t reuse it, refuse it.” According to the World Environment Day web site: “While plastic has many valuable uses, we have become over reliant on single-use or disposable plastic – with severe environmental consequences. Around the world, 1 million plastic drinking bottles are purchased every minute. Every year we use up to 5 trillion disposable plastic bags. In total, 50 per cent of the plastic we use is single use. Nearly one third of the plastic packaging we use escapes collection systems, which means that it ends up clogging our city streets and polluting our natural environment. Every year, up to 13 million tons of plastic leak into our oceans, where it smothers coral reefs and threatens vulnerable marine wildlife. The plastic that ends up in the oceans can circle the Earth four times in a single year, and it can persist for up to 1,000 years before it fully disintegrates. Plastic also makes its way into our water supply – and thus into our bodies. What harm does that cause? Scientists still aren’t sure, but plastics contain a number of chemicals, many of which are toxic or disrupt hormones. Plastics can also serve as a magnet for other pollutants, including dioxins, metals and pesticides.”

To combat the environmental and human health issues associated with the global addiction to single use plastics, the UN Environment Programme is encouraging people to join the global game of #BeatPlasticPollution tag. Here’s how to play:

So what single use plastic item will you pledge to give up today—plastic straws, disposable plastic shopping bags, disposable coffee pods, plastic water bottles, or something else? For inspiration, see http://worldenvironmentday.global/en/get-involved/join-global-game-beatplasticpollution-tag. 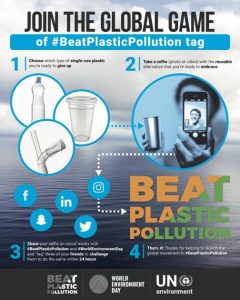 This post was written by Joy Scrogum, ISTC Sustainability Specialist.