The Green Events Guide is geared to support planning and action around seven focus areas common to public events:

It is intended to assist community-based, volunteer event planning leaders and teams, especially folks in rural areas. This FREE online resource was developed by the EarthWays Center of Missouri Botanical Garden, with support from the U.S. EPA. The completed guide includes a webinar recorded on 10/20/17.

Finding products that are safer for you, your employees, your family, and the environment should be easy. That’s why EPA developed the new Safer Choice label. Products with the Safer Choice label help consumers and commercial buyers identify products with safer chemical ingredients, without sacrificing quality or performance.

More than 2,000 products currently qualify to carry the Safer Choice label. You can find products for your home at retail stores, as well as products to use in facilities like schools, hotels, offices, and sports venues.

Products have to meet stringent criteria in order to earn the Safer Choice label. In addition to product ingredients, the program also considers product performance, pH, packaging and more to ensure that products with the label are safer for you and your family. Once a product meets the Safer Choice Standard, EPA conducts annual audits to ensure that they continue to do so.

You can search for products that meet the Safer Choice Standard here. If you’re a manufacturer who wants learn more about qualifying for the program and applying for certification, EPA has more information here.

What is the Greening Sports Directory?

The Greening Sports Directory (or GSD) is a comprehensive directory of local, regional, and national contacts and resources to help sports facilities green their operations – whether professional, university-level, or recreational. Facilities looking to improve their energy efficiency or their green purchasing practices now have a rich list of contacts available to assist their efforts. The directory is organized into 20 specific Green Topics. It currently includes 18 major metro areas in 16 states. PPRC updates and adds to the directory on a monthly basis. This month, we added three new metro areas: Indianapolis, Dallas, and Atlanta.

Who is it for?

Our primary audiences are sports organizations – from professional teams to pee-wee leagues. But the GSD includes useful resources for every kind of organization – businesses large to small, manufacturing industries to the service and hospitality sector. Whatever your sector, we encourage you to check out the directory to see how it can serve your needs. 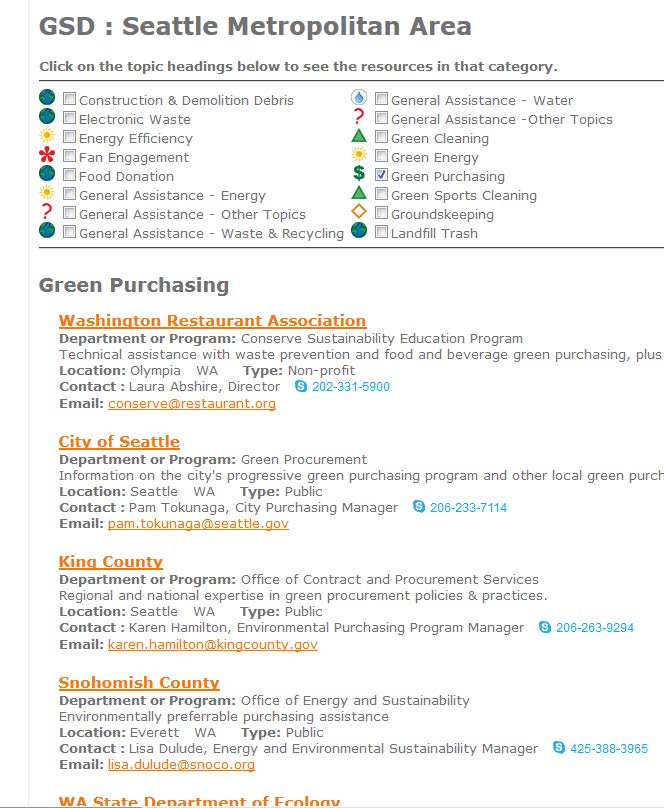 What does each metropolitan area listing include?

Why a directory for sports?

Sports serve as a powerful cultural force. To green sports offers a huge opportunity to move the sustainability needle in both cities and in households. Additionally, we saw a need for a comprehensive and vetted directory that connects organizations with those regional and national resources best suited to help them. Having a slew of good resources at hand will help organizations make comprehensive and time-effective efforts to green their operations. For more Greening Sports resources, check out our Greening Sport page, as well as GLRPPR’s Green Sports sector resource.

In the latest P2 Pathways column, author Paula DelGiudice from the Pacific Northwest Pollution Prevention Resource Center (PPRC) explains how teams in Philadelphia have been at the forefront of efforts to keep waste out of landfills and use renewable energy.

To read past columns in the P2 Pathways series, visit http://www.greenbiz.com/business/engage/enterprise-blogs/p2-pathways.

It’s a cliche, but things sure have changed since when I was in school. As I mentioned previously, my daughter recently started kindergarten. In addition to recess, which one would expect, she actually has physical education (P.E.) every third day (alternated with music and art classes). I’m pleased she’s being kept active, but surprised to be thinking about gym class quite so soon. In the midst of watching her explore the brave new word of P.E., I received an e-mail inquiry regarding the Greening Schools web site. This was a joint project of the Illinois EPA and GLRPPR’s parent organization, the Illinois Sustainable Technology Center (ISTC, formerly WMRC), which is unfortunately no longer funded (please e-mail me any ideas regarding funding sources to maintain and expand this site). The inquirer was interested in greener lesson plans geared toward P.E. I’ve seen resources related to greening athletic facilities, but the idea of actually greening the P.E. curriculum was an interesting twist to me, so I decided to share some of the resources I provided in response here. In this post I’ll discuss both resources for more sustainable P.E. facilities as well as curricula. END_OF_DOCUMENT_TOKEN_TO_BE_REPLACED

[Jeff Miller, Conservation Advocate at the Center for Biological Diversity in San Francisco, CA, is guest blogging today. His topic: CBD’s petition to the U.S. EPA to ban lead shot and fishing tackle under the Toxic Substances Control Act. Thanks to Madeline Sten, P2Rx National Coordinator, for asking Jeff to contribute a post.]

When the Environmental Protection Agency ruled last year to phase out the use of lead wheel weights for balancing car tires, the decision passed with no opposition from car manufacturers, wheel weight producers, or public citizen groups. It was, after all, a common-sense decision that guaranteed a safer environment, reducing the lead released into waterways when weights drop off cars and are ground into fine particles by passing vehicles. Manufacturers will have to adjust their production processes, a small price for society to pay for removing a source of toxic lead.

In a similar effort, the Center for Biological Diversity and American Bird Conservancy, along with other conservation, hunting, and veterinary organizations petitioned the Environmental Protection Agency this month to ban lead from ammunition used in hunting and weights used for fishing.

The petition to eliminate lead from hunting and fishing sports has nothing to do with the rights of Americans to bear arms and to hunt. Literally hundreds of recent peer-reviewed scientific studies have shown the dangers of lead in the environment for both wildlife and human health.

A variety of non-toxic bullets, shot, and fishing weights not made of lead are readily available and are equally effective. Some non-lead ammunition costs a bit more, but once lead-free regulations are in place and manufacturers re-tool and begin producing copper, steel, and tungsten bullets and shot in higher volume, prices will drop dramatically, just as the cost of eco-friendly light bulbs fell as they became commonplace.

Lead is an extremely toxic substance that is dangerous to people and wildlife even at low levels. Exposure can cause a range of health effects, from acute poisoning and death to long-term problems such as reduced reproduction, inhibition of growth and damage to neurological development. Bald eagles, golden eagles, California condors, and other predatory and scavenging birds die in significant numbers every year as a result of feeding on carcasses or gut piles contaminated with lead fragments left behind by hunters.

Up to 15 million mourning doves die each year from lead poisoning from consuming spent lead shot pellets, which they mistake for grit– that’s almost as many doves as are intentionally killed by hunters. Swans, cranes, ducks, geese, loons and other waterfowl ingest spent lead shotgun pellets and lead-based fishing tackle lost in lakes and rivers, often with deadly consequences.

The deaths of these and other lead-poisoned birds due to renal failure, neurological dysfunction, or seizures are slow and painful. Harder to measure, yet possibly more significant than direct mortality, are secondary losses due to the “sub-lethal” effects of lead, such as reproductive failure, increased susceptibility to disease and infection, and increased predation due to anemia and weakened muscles.

In the United States, 3,000 tons of lead are shot into the environment by hunting every year, another 80,000 tons are released at shooting ranges, and 4,000 tons are lost in ponds and streams as fishing lures and sinkers. The science on the environmental impacts of lead ammunition poisoning is indisputable. The petition references nearly 500 peer-reviewed scientific studies that starkly illustrate the widespread dangers from lead ammunition and fishing tackle. At least 75 wild bird species in the United States are poisoned by spent lead ammunition, including our national symbol, the bald eagle.

Humans who eat game meat shot with lead bullets are also at risk. X-rays of shot deer and of packaged game meat reveal tiny fragments of lead left behind when bullets disintegrate on impact. Children are particularly sensitive to even low levels of exposure to lead and can suffer neurological damage. In recent decades our society has taken actions to reduce human exposure to lead from paint, gasoline, water pipes, toys, waste dumps, and shooting ranges. Spent ammunition and fishing weights are the major remaining uncontrolled sources of ecologically relevant lead exposure.

Hunters have made substantial contributions to conservation – funds from their hunting licenses and the voluntary purchase of duck stamps support National Wildlife Refuges and wildlife habitat. Shooting non-lead ammunition is a logical continuation of hunting conservation ethics, which is why the hunting group Project Gutpile, one of the co-petitioners to the EPA, has been rallying hunter support for the switch to non-lead.

The change to lead-free ammunition is essential, reasonable, and timely. Advances in technology and increased knowledge of lead’s risks mean we can now enjoy hunting and fishing without contaminating the land, wildlife, or ourselves.

For more information visit the Center for Biological Diversity’s Get the Lead Out web page.

The Fourth of July approaches. For those of us in the U.S. portion of the Great Lakes region, thoughts of Independence Day fireworks displays, parades and outdoor parties beckon from the weekend. While preparing for the festivities, you may want to consider how pollution prevention (P2) relates and include a little green with your red, white and blue. END_OF_DOCUMENT_TOKEN_TO_BE_REPLACED

The Sustainable Sites Initiative is an interdisciplinary effort by the American Society of Landscape Architects, the Lady Bird Johnson Wildflower Center and the United States Botanic Garden to create voluntary national guidelines and performance benchmarks for sustainable land design, construction and maintenance practices. The information on the site is meant to be applied to sites both with and without buildings, including, but not limited to:

The Initiative site provides a copy of the report Sustainable Sites Initiative Guidelines and Performance Benchmarks – Draft 2008, which focuses on measuring how a site can protect, restore and regenerate ecosystem services – benefits provided by natural ecosystems such as cleaning air and water, climate regulation and human health benefits. This report contains over 50 draft prerequisites and credits that cover all stages of the site development process from site selection to landscape maintenance.

Travel Green Wisconsin is a voluntary program that reviews, certifies and recognizes tourism

businesses and organizations that have made a commitment to reducing their environmental impact. Specifically, the program encourages participants to evaluate their operations, set goals and take specific actions towards environmental, social, and economic sustainability. The program is also designed to educate travelers to Wisconsin about sustainable tourism practices. It promotes smart business practices, giving the state’s tourism-related businesses and organizations a significant point of differentiation from their competitors, and supports the state’s overall tourism brand. Examples of the types of businesses that can participate include: accommodations, attractions, restaurants, shops, resorts, convention, centers, golf courses, campgrounds, marinas, tour operators/leaders, events/festivals, chambers and CVBs.