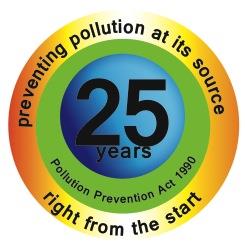 Cassie Carroll, Associate Sustainability Specialist and coordinator for the Illinois Governor’s Sustainability Awards, contributed this post about the history and impact of the program. If you would like to spotlight your project or program on the blog, please contact Laura Barnes.

Since 1987, the Illinois Governor’s Sustainability Awards has recognized over 500 public and private organizations for environmental excellence. In it’s 29th year, it is the longest-running awards program with a pollution prevention focus in the country. This year’s ceremony will be held on October 27th at the Sheraton Chicago Hotel and Towers (301 E. North Water St.) .

The awards were originally called the Illinois Governor’s Pollution Prevention Awards. At that time, ISTC was named the Illinois Hazardous Waste Research and Information Center (HWRIC). HWRIC’s Industrial Technical Assistance Program had just been established to help Illinois manufacturers reduce pollution and prevent waste. The awards program was modeled on a similar one in North Carolina (since discontinued). The goals of the program were to recognize those companies that had significantly reduced their impact and encourage others in the state to follow suit.

The number of award winners continued to grow teach year. In 1999, the Center (then known as the Waste Management & Research Center) added a Continuous Improvement Award to honor companies that continued to demonstrate excellence in pollution prevention. In 2009, the name of the award changed to the Illinois Governor’s Sustainability Awards. The change  acknowledged the Center’s broader scope as the Illinois Sustainable Technology Center and recognized that many applicants were not only reducing pollution, but incorporating all three aspects of sustainability: environmental, economic, and social.

The awards program continues to be successful for several reasons. First, companies realize that there are cost savings involved with efficient use of materials, water, and energy. Many companies also want to get ahead of regulation and demonstrate good corporate citizenship in their communities. Finally, many organizations and companies integrate sustainability because clients and consumers demand that they do so.

The impact of the award winners is impressive. Although the majority of winners are from manufacturing companies located in Chicagoland area, applicants come from every region of the state and constitute a broad range of public and private organizations. Hospitals, manufacturers, municipalities, NGO’s, higher educational institutions, K-12 schools, and corporations have earned awards. Many companies apply for awards more than once. For example, Navistar has won the Governor’s Sustainability Award 14 times since 1987. A summary of the environmental and economic impact of the 2013 award winners appears at left.

The future of the Governor’s Sustainability Awards remains bright. Award winners not only contribute significantly to the environmental health of both the state and the Great Lakes region, they also serve as role models to other organizations.